Posted on January 24, 2011 by thestiltsofdeath

Hello everyone! I hope your week is going well! I did some really quick roughs of compositions for 2 final zombie world pieces I was thinking about doing. I’ve focused on the surrounding setting of the Zombie world, as well as the scene where Zombat and Aranya are going to the entrance of the Human World. I’ll explain the reasonings for why I chose certain aspects – the drawings are extremely rough, just to get an idea of space and composition.

Oh, and the following quick design for Zombat is a general reference I made – I know that this isn’t going to be his design, but I just made something simple for myself for when I sketch him for now: 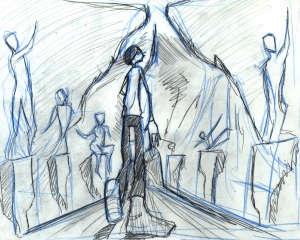 I decided an upward angle might be good for a more dramatic effect in the composition. I actually would like to change a few things already – skew the mountain more, as well as the angles on the statues. Also, I’ve been looking at Bernini’s sculptures to get ideas of what kind of statues should like the entrance and found some nice ones that might suit the scenes. But the main reason for this one is to get an idea of the mountain, the green smog, and the idealized statues – just so there’s a basic idea of space.

Trip to the Human World

I thought what might be interesting is, instead of a static scene (sorta like what I did last quarter), having the two characters move throughout the world – I thought maybe a maze-like path to the human world would be interesting. I thought the rock formations could have contours that led in the same direction as the movements, feeding the eye line down. I thought the two running – Aranya with the cloak in her hand – could show the difficulty for leaving the Zombie world, as well as a needed haste.

Along with the compositions, I quickly jotted some storyboards for a quick animation logo. Now, I’ll be the first to admit they’re extremely rough; actually, I think almost unreadable unless you are inside my head (which I hope, for all your sakes, you never have to be subjected to that). So I’ll put them up and explain generally what I was thinking.

In this, I was thinking the use of simple silhouettes might make an interesting animation, since the logo is graphic. I thought a silhouette of Orm, walking and talking on the phone, followed by Zombat who is shrinking behind her to get her attention, followed by Aranya who sneaks behind Zombat to get his attention. Then, the silhouettes distort as if shadows, creating a similar shape to a heart, which then transforms into the logo.

If this is an idea you think might be worth pursuing (of course, if my awful storyboards haven’t destroyed the idea themselves), I’ll make much cleaner and recognizable storyboards for the next session.

Can’t wait to talk to you in a few days!

This entry was posted in Logo and Package Design, Sketch Designs. Bookmark the permalink.