Bing gots more Death Theory (and some other stuffs also)

Posted on November 3, 2010 by kaipreawwaan

Firstly, Ajarn Kongdej asked me about the reapers in my last post. Therefore, this week I came up with more details about them.

Characteristics: Reapers have no visible face and body. They always wear black cloaks. Reapers cannot talk, but they can communicate with other reapers only by using little gestures. 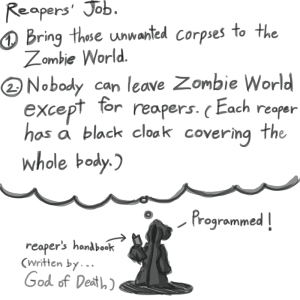 Reapers always follow their rules. Whenever an unwanted corpse is available in the human world, a volunteer reaper travels to bring that corpse to the Zombie World. They also guard the tunnel very well, so no zombies can leave the human world. As Zombie doesn’t have much strength(They are dead people!), it is very easy for reapers to block them from passing the tunnel. Reapers can just push the zombies with little force and send them fly into the trash hole even though they are outnumbered.

However, The God of Death has made a big mistake in the Reaper’s Handbook. As you can see, the definition of reapers that is written in the handbook is very unclear. With this mistake, reapers allow zombie that wears black cloak to pass. Black cloaks can be found in the trash hole. It also depends on luck to find one because these trashes are sentfrom the human world.

Other than the death theory, I have another version of the main characters that I redesigned. 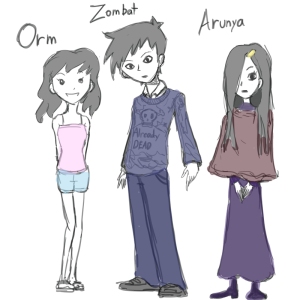 Orm’s main color is pink, which I think is the most lovable color for girls.

Zombat’s main color is blue. I use cool color because I think warm color may not work well for a dead and not so happy man like Zombat.

Arunya’s main color is violet. As she is a scary character when she stalks Zombat in the human world, I gave her straight but not clean hair. (like Japanese ghost.) I gave her a yellow hairpin to contrast with her outfit to represent the difference between her inside and outside.

I also have a rough sketch of the halloween party.

Lastly, the scene where Zombat breaks apart. As Ajarn Kongdej doesn’t want people to see Zombat breaks. I make him quietly walk to the bridge alone. Then he throws away his prize and starts to break apart. 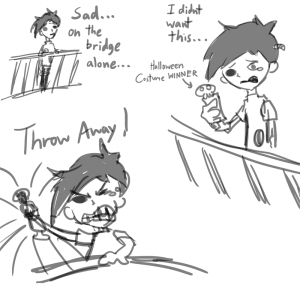 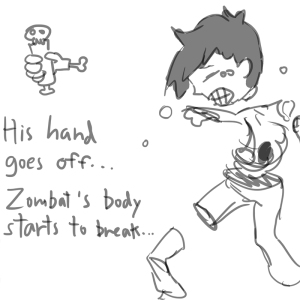 That’s all I have for this week.

This entry was posted in Uncategorized. Bookmark the permalink.